This blog is a commendation to a client of mine. Alec approached me in late February for my guidance in helping him gain muscle. He is a young guy who is very slender and has the type of frame that is very difficult to put on muscle. He is, in the business, what is called a hard gainer.

Hard gainers have to be especially focused on proper eating, and the exercise program needs to be intense enough to stimulate muscle growth on a consistent basis with enough down time to fully recover between the workouts. To put it bluntly, hard gainers need to be especially motivated and focused to put on any meaningful muscle.

He committed to me for 40 personal training sessions, and I have to say that he did a fantastic job putting on muscle. According to the measurements, he gained nine pounds of muscle in a little over 5 months. Just as tellingly, he did not gain any extra fat in the process. Let’s start with the photos: 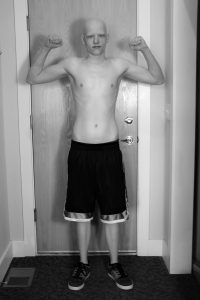 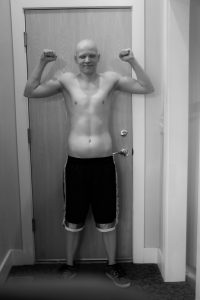 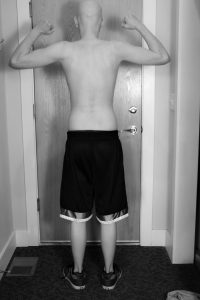 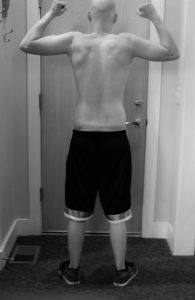 Here are the measurements:

Let’s take a closer look at the data. His skin-folds were 52 mm on the first day and 54 mm six months later. The 2 mm difference is statistically insignificant since I could have measured in a slightly different place between the two times. This suggests that his body fat percentage did not go up or down. It stayed about the same, and I will comment more in depth on that shortly.

The girth measurements are what is both inspiring and impressive. He gained an inch in each arm…and almost two inches on each thigh. This demonstrates that he did, in fact, gain some solid muscle. The fact that you can see more tone in his muscles corroborates with the girth measurements that he did gain muscle and not fat. As an interesting note, I never had Alec do a calf raise, but you can see that his calves are bigger in the second set of photos. This is an example of how the muscles of the body will gain strength in relation to the other muscles of the body, even if there is no direct isolated work on a particular muscle.

Surprisingly, he also gained some girth around his belly button and waist, even though he did not gain any meaningful fat according to the skin fold measurements. This leads me to hypothesize that he may have gained some thickness in his core muscles, which would make sense because we worked just as hard on strengthening his core as we did building his superficial musculature.

When the question of building muscle mass comes up, most trainers will recommend a rather lengthy workout regimen. It will usually consist of splitting up the body parts and performing many sets. Additionally, trainers will in general recommend that the client spends at least four days a week in the gym. Personally, I am not a fan of that style of training because it is simply far more time that is needed to make the muscles stronger. Research has shown that increases in muscle strength….and with it more size, is better achieved by training intensity over training volume. In other words, harder but shorter workouts.

Operating from that paradigm, I had Alec doing two workouts a week, training the whole body at once. Furthermore, his workout sessions lasted twenty to thirty minutes each, so he spent less than an hour a week devoted to exercise to gain 9 pounds of solid muscle.

It may seem nearly impossible for someone to make large gains in strength with very little exercise. I get it, but let me share some numbers with you.

Alec’s first leg press was with 80 lbs and he did 14 reps. He did not go to failure but he sure felt it. By his last session, Alec did a leg press with 650 lbs for 12 reps clean, meaning he was ready to move up to 670 lbs his next workout. He started with 15 lbs for dumbbell presses and he was doing 45 lbs when for his last session. The final exercise I want to use as a comparison is the pull-down, which is a good exercise for the upper back. Alec started with 50 lbs and he used 115 lbs for his final workout with me.

Is it possible that Alec would have seen even better muscle gain from a typical split routine? Even though I am a staunch proponent of short, intense workouts for best results, I do acknowledge that some people have success with longer and more frequent workouts. However, a nine pound gain in muscle in six months is a remarkable accomplishment, and I do not think he would have built more muscle with a volume approach. He may have gained the same amount of muscle, but he would have spent far more time in the gym to make the same gains.

Are you struggling with your exercise routine? If so, you can call me for a free 15 minute phone consultation. My number is 303.587.0149

I have a very different approach than most fitness trainers when it comes to a diet for building muscle. The more common approach for building muscle is to make sure the trainee consumes more calories than he needs for maintenance so that there is plenty of energy for muscle synthesis. Moreover, the diet will also be high in carbohydrates. The goal is to have the nutrition, I assume, to drive muscle growth. I do not care for this approach because the trainee will conjointly gain fat with muscle.

From my research, I realized that muscle building does not work that way. It is the stimulus from an intense workout that drives muscle growth, and the appetite will support the amount of calories the trainee needs. Let me explain.

We all know that when kids hit the teen age years, they develop a voracious appetite. The boys especially. Furthermore, we all know that they are going through a growth phase…a period where they need far more calories than they would need when they stop growing. Here’s one more example before I make my point. When you delve into the research on obesity that was done before the second world war (those guys were onto something about the true cause of obesity), it was clear that the generally high caloric intake and sedentary behavior was driven by hormonal manipulation. The researchers described it was this way: The obese person does not get fat by eating too much and exercising too little. The obese person is eating too much and is sedentary because he is getting fat.

In both cases, it is the effect of hormones that drive appetite. For the teenagers, it is the release of testosterone and human growth hormone among others that spur growth, thus driving a higher appetite to support the growth. People who struggle with obesity are also driven by hormonal manipulation. In this case, it is the chronic release of insulin that causes the body to respond in the manner to gain fat. Insulin is the hormone that encourages fat accumulation, and at the same time it locks up the fat already stored so it cannot be used as energy. Excess insulin will increase appetite…and decrease daily activity.

The way I see it, it is the proper form of exercise that will send a signal to the body to build muscle (intense strength training), thus prompting the body to release the hormones needed for muscle growth (testosterone, human growth hormone and the like), which will then stimulate the appropriate appetite the body needs to fuel the muscle growth without gaining excess fat. The cutting phase that bodybuilders got through to lose the fat they gain during the off season is no fun. It does not make sense, in my opinion, to put my clients through a restricted calorie eating plan if it does not need to be.

This is a way of eating for my clients who want to gain muscle to do so without having to count calories or overeating. However, to make this happen, the trainee must keep his carbohydrate content low. Doing so will keep the insulin levels lower, and it will allow the other hormones that we want to be released to do the jobs they are supposed to.

That is exactly what I had Alec do. I recommended a low carbohydrate/high fat/moderate protein diet. I also instructed him to eat when he was hungry and stop eating when he was full. Moreover, I did not put him on a regimented eating plan where he had to time his meals. This gave him much more leeway with his diet, making the eating plan much easier to follow and far more sustainable than what bodybuilders have to do.

It worked like a charm. Alec gained muscle. He did not gain fat. There actually was a period where he was losing fat while he was getting stronger because we both noticed that his abs were showing more definition, but he went on a junk eating binge for a while and gained some of the fat back. If he would have stayed the course with his eating, he would have gained the muscle and lost some fat at the same time.

So how much muscle can Alec gain when it is all said and done? That is hard to say. Genetic factors really come into play. It depends on how many fast twitch fibers he has compared to slow twitch (fast twitch fibers grow bigger and get stronger), how much testosterone and human growth hormone his body naturally produces, and how much myostatin he has among other things (a protein the body produces to inhibit muscle growth).

I would venture to guess that he can gain about another 10 to 20 pounds of muscle if he stays focused and motivated to continue to train hard. He can gain another inch, maybe inch and a half in his arms along with another two or three inches in each thigh. He can also get his weight to around 165 to 170 pounds. He can stand to lose some fat too, although I would not recommend that he focuses too hard on that at this juncture.

Alec is a hard gainer. There is no question about that. He has the body that makes it difficult to put on a lot of muscle, but he still can gain muscle and develop the coveted “buff” body. Gaining 9 pounds of muscle like he did in the first 5 months of training is a fantastic triumph, and I grateful to be part of his journey. It has been a pleasure.

Here We Go Again: Another Doctor Claiming The Keto Diet Will Kill You. Really?

Starvation Mode: Is It a Real Phenomenon?