Yalana never did an organized diet and exercise program before she started working with Sharon. Her only form of exercise was walking, and she does a lot of that. She does not own a car so she takes the bus everywhere she goes, and by default she walks more than the average person. In spite of her general high level of physical activity, she was still gaining fat and losing muscle.

Yalana always wanted a hot looking body, but she never could figure out how to get it. As luck wold have it, my wife went to see her about getting her nails done (Yalana is a nail tech), and they had a conversation about what it takes to get the kind of body she wants. Yalana was very excited and they struck a deal so Yalana could get some customized personal training with my wife.

A year later, Yalana has the rocking bod she always wanted.

Here are the photos taken when she started and the follow-up photos eight months later: 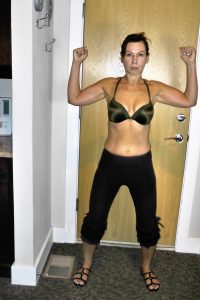 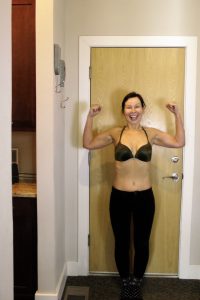 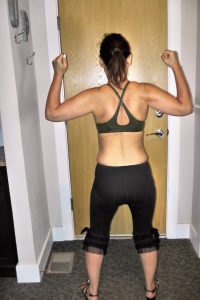 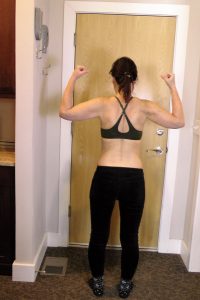 Let’s start with the measurements, and then I’ll give my insight to what it all means.

You can also see that her arms and upper back look leaner too.

To sum it up, Yalana gained muscle and lost fat even though the scale said she gained weight. It looks like she gained about 4 or 5 lbs of muscle, and I bet she lost about 4 to 5 pounds of fat.

She kept at it, and here are some recent photos: 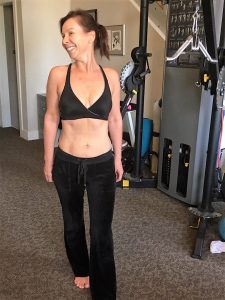 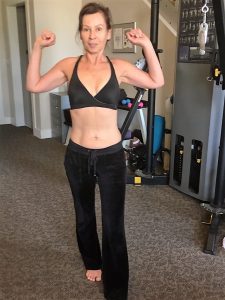 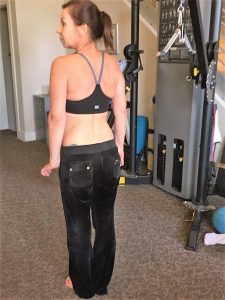 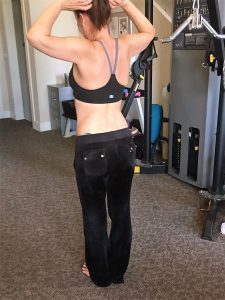 These photos were taken spontaneously. Yalana came in and showed us how lean she was in through the waist, so we took some photos just to see. We did not take measurements, but we will soon. However, you can clearly see that she gained even more muscle and lost more fat. She has tight, lean abs now. You can see the definition, and she has a good hour-glass shape too.

Yalana made a fantastic transformation with her body. It is wonderful to see.

For her exercise program, Yalana did two workouts a week with Sharon, and she was incredibly consistent. She never missed a workout. Besides walking, Yalana never did any kind of cardio program this whole time. I think she is a great example of how unimportant cardio work is for losing fat. Yalana’s workouts consisted of a mixture of intense strength training, functional training, and core/stability work, all done in under 30 minutes per workout.

Yalana made some big changes to her diet when she started working with Sharon. She used to eat pastries for breakfast every day, and she had quite a bit of a sweet tooth. For the most part, she did not pay much attention to what she was eating. This is what she eats regularly now:

She no longer eats meat because her doctor said her cholesterol is too high, and she does not drink coffee.

Yalana is not as strict on the carbohydrates as we recommend, for we would rather see her cut out the breads, and along those lines, we would like to see her eat more meat. After saying all of that, though, she was still very successful with her program. As they say, if it ain’t broke, don’t fix it.

Just like Sharon, Yalana is strongly dedicated to her new way of life. When I interviewed her for this post, she told me that she values what we do very highly. She gave an example that if she was offered a full week paid vacation in Hawaii or a year’s worth of personal training sessions with us, she would choose the training sessions. Her commitment backs that up, for she always takes the bus across town for her workouts, and she never missed one! Rain or snow, it did not matter. Her regret is that she wished she would have been able to start ten years sooner.

Because of her new-found strength and fitness, Yalana feels much more confident in her body. She noticed a dramatic improvement in her skiing. She says she has so much endurance that she feels like she could “smoke a cigarette while she goes down the slope”. Not that she would…hopefully. She also loves showing off her body to her friends because she has the tight tummy and narrow waist that she always wanted. She feels more comfortable in her skin, as they say.

Yalana’s final statement was that it took her 50 years to find her dream…but she did find it.

Starvation Mode: Is It a Real Phenomenon?

Get A Good Night’s Sleep